The Fingertalk team, represented by the founder Dissa Ahdanisa, won the first prize, Grand Prix, of Asahi Shimbun annual Daigaku SDGs Action Awards in Tokyo on 20 February 2019. After passing the first round of document application, Fingertalk, representing Ritsumeikan Asia Pacific University, was selected to be one of 12 finalists.

As suggested by its name, the competition was open to undergraduate, graduate students and researchers from universities all around Japan to come up with ideas that will help achieving any of the 17 Sustainable Development Goals (SDGs) by 2030. The goals cover areas such as poverty eradication, high quality education and social justice. Accordingly, finalists ideas ranged from providing educational program for young Japanese students to creating affordable and portable toilet for underprivileged communities in Southeast Asia.

Dissa presented Fingertalk most recent project, Plushindo. It empowers underprivileged Deaf community by creating creative products to support endangered animals in Indonesia. The project was born from the collaboration with Hijrah Saputra from Piyoh Design, who designed the creative product, plushies, modeled after several endangered animals in Indonesia such as orangutan and Komodo dragon.

Last year, supported by New Zealand Embassy, while training the Deaf, the project was able to produce up to 600 plushies and provide educational program to young school children all around Indonesia. Dissa, Hijrah and Fingertalk team hopes by winning Daigaku SDGs Award, the project will be able to expand and create opportunities for more Deaf people in Indonesia.

The award was given by Mr. Ishida Ichiro, Marketing director of Asahi Shimbun as the lead judge. He mentioned that the project has a potential to expand globally and to sustain in the coming years. Dissa dedicates the win to all of the Deaf crew who has worked hard and hoped that it can act as a bridge for Japan and Indonesia. “It is definitely a step to eradicate social inequalities. We will work hard to create more impact in the world. Ganbarimasu!” 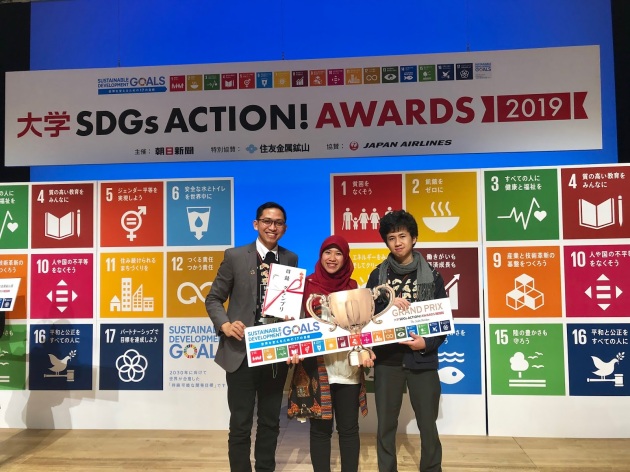